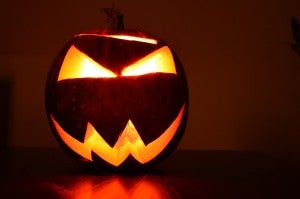 Halloween is right around the corner, so I thought it would be fun to celebrate the season with a few little known facts about the holiday. Whether you celebrate with costumes, decorations, and a posse of trick-or-treaters or simply leave the porch light on to pass out candy, these are a few things to keep in mind to keep yourself and your family safe this year.

1. Halloween is the most dangerous night of the year for pedestrians. AAA reports that the combination of children running around in costumes, along with drunk drivers on the road, creates a perfect storm. It is suggested that parents accompany kids if possible, make sure they are visible, and coach them on road safety. Reflective clothing as well as portable lights should be a part of your Halloween gear this year to ensure you're visible to any vehicles you may encounter on your way, if you plan to trick-or-treat by foot.

2. Your Halloween celebrations are giving the economy a boost. From its vampy costumes and sweet treats to macabre household decorations, Halloween is big business. So big, in fact, that it's the second-largest commercial holiday in America—only Christmas surpasses it in sales. According to the National Retail Federation, consumers spent $5.8 billion in 2010, and in 2015, Americans are set to spend $6.9 billion on Halloween.

3. In some places, the oldest you can be to legally trick-or-treat is twelve (12) years old. In 2010, Belleville, Illinois, became the latest city to ban trick-or-treating for kids over 12. Teens can face fines from $100 to $1,000 for going door-to-door (although according to officials, more often than not, over-age Halloween-goers are just given a warning). This city found that children over the age of twelve were using Halloween as an excuse to loiter in public places, commit random acts of vandalism, and basically be a nuisance. If you're over the age of twelve, and still going door to door, perhaps it's time to pass the baton to the next generation.